[PXL] has released a “pre-release” version of their new skin Sophia.
This skin is available at the Around The World event which opened TODAY!

The skin comes in the above 2 skin tones for this event – Olive and Sunkissed.
As well as all of the following lipstick options:

I really like this skin, it is possibly my favorite PXL skin so far.
Be sure to head over to the Around the World event to see how Sophia looks on you 🙂

Posing with my man tonight and I think we look quite cuddly. 🙂

I loveeeee these hoodies from Ronsem. They are available for both males and females and they fit perfect.

Oh! And my jeans are available at The Dressing Room from [Cynful]. I am a fan of the Zia mesh jeans, I have the regular version in lots of colors…
but you can get the “worn” style at the current round of The Dressing Room for a good price 🙂

Here’s all the details:

I put together a really casual look today, which includes the new Zia v2.0 mesh jeans from [Cynful].

I don’t own many pairs of mesh jeans, so these are an awesome new addition to my inventory. They come in multiple options: Flare, Bootcut or Skinny.
I am wearing the flare option in all of my photos.
Here is a back shot:

And also, all the color options:

I am kinda short on words, I need to go make sure I am prepared for this freaky hurricane that is planning to hit hard in a few hours.
We already have crazy wind and rain and this isn’t supposed to be the worst part… eek!
So if I disappear I probably have no power *pouts* Wish me luck ❤

It’s a frightening world to be alone in…

Today’s post is a bit creepy…sometimes I don’t know where my imagination runs off to when I am planning to blog things.

It all started with a little bloody dress and somehow resulted in this madness:

I used this mouth/make-up last year in my freaky clown Halloween look and quite honestly it freaked me out then, and still does now. But.. I love stuff like this.
I have a weirdly dark imagination, yet I hate scary movies, haunted houses, and stuff like that in general. I wouldn’t mind if I was the one doing the scaring, I just don’t like to be caught off guard. I am quite strange, but it works for me 😛

Hope you like this insanely bizarre look, and happy early Halloween!

Love knows no limit to its endurance, no end to its trust, no fading of its hope; it can outlast anything.
Love still stands when all else has fallen.

I was completely inspired by Halloween and a bunch of new releases to put together these looks…
The make-up is new, and comes with piercings ( not shown ) and you can find it at the FAIR event from .HoD. / +Nuuna+.

The skully bodysuits are also new from CLEMMM and you can find them at E U P H O R I A/Limited Bazaar. They come in male and female options, but there are only a limited number of them available. Hopefully they are not sold out by the time I am posting this. We both picked them up last night though and there were still copies available 🙂

Oh and yes.. we put hoodies on our bones 😛

One more new thing, which I feel completed my skully girl look is my flower headpiece from PIDIDDLE. It’s available at the My Attic event and comes in 8 different colors. I loved the red shown though, as it was a bright contrast to the black and white.
Here’s a straight shot so you can see it in full:

I really do love this look, so I am probably not gonna change out of it today either, and even if I do…it’s going back on 😛

Just a few things to remember too.. when the 13th rolls around, be sure to limit your scripts!
There are multiple script gates that will not even let you in with over 50 scripts. I just wore a full body alpha and detached everything. I noob walked my little invisible self all around the sim without a care in the world 🙂

But anyway.. On to the exclusives!

I have been looking for a new mesh trench coat and lo and behold… I found one at Cinema!
Paired with these cute new boots from Lassitude & Ennui and the fierce gun poses from CnS shown above, I put together a look that would be perfect for an action spy movie 😛

Oh and.. before I forget, something totally non-Cinema related but amazingggg.. my hair!
It’s a subscriber gift from Magika and comes in the below 2 tone options:

Just head to Magika before the end of the month to pick these up, they are perfect Halloween colors!

Enough from me for now, but expect lots of other Cinema posts coming up! I am off to get some coffee… not sure why I am awake this early 😛

I was actually really excited when I put these on and they fit great and looked adorable. I loveeee fall clothes.
Sweaters, coats, jackets… just everything that comes this time of year.

I had a hard time picking a color to wear in my main pics, but I opted for the above green tone.
Here are all the other colors you have to pick from:

Enough rambling from me today ( I have been on a blogging spree… lol ).

I wanted some fall themed pictures of my man and I, and as a result I bring you this couple’s blog post 😛

We both picked up the new mesh coats from .:villena:. and loved them.

I have been in a sweater/hoodie/coat mood in both RL and SL lately, so they perfectly suited my mood.

The coats come in lots of colors, but it seems we both opted for the neutral tones.

Eeek! I have been a little behind on blogging, RL just got busy.

Cracked Mirror has some cute mesh t-shirts out at the Dead Cool Halloween Event.

The Dead Cool Halloween event runs from Sept. 30th – October 31st and all items are new and exclusive to this event. Go check it out! 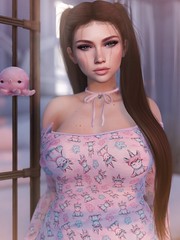 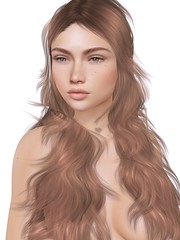 Oh Look! It's A Blog!
Blog at WordPress.com.